A Diary of the Absurd

Goodness, I abandoned my blog so long ago, it took a few minutes to find blogger, and figure out what to click on to start a new post.  Our life has been such an odd series of moves and jobs and odd circumstances over the past three years, I desperately wish that I had been recording it.  But every time I  thought about returning here and beginning a "Diary of the Absurd" I would tell myself that it has now all settled down and there is no point in keeping track of what will surely become a quiet, almost boring life.  But since it just seems to keep getting more crazy by the month, I might give it a try.  If it does become quiet and boring, well, then I will probably stop blogging again.  But in the event that it continues to be one roller coaster after another, I might want to look back on it when I am old and tired and marvel at the madness, and remind myself that even though I'm old and tired, I'm stronger than I think....

So here's part of the email I just sent my crew in Dallas...


"Greg talked on the phone today with someone that he interviewed with last March.  That company has some DoD contracts.  They never filled this position for a Program Manager.  (Greg is a PM with a company right now who just laid off his entire division, and are now scrambling to figure out who is going to keep up with all those programs.)  All these companies that work on DoD contracts end up competing for some contracts, and working together as prime and sub-contractors on other contracts.  So it's a small world and many of them know each other.  Anyway, this company seems to be now about to fill this PM position.  It is here in SA.  After that phone call, which was with a guy that he has known for many years (both were in the same field in the military) Greg got an email asking if he could interview here tomorrow at either 10 or 3.  He emailed back and asked for 10 because he will be in the office all afternoon tomorrow doing some transferring of stuff there.  He hasn't gotten an email back yet confirming that 10 time, but is assuming that he will have the interview at 10.
So y'all could all pray that that interview will lead to something or not, whatever God would want.
There are a lot of people in that DoD world here that are looking for stuff to send to him.  He gets a lot of emails and calls telling him to send a resume to so-and-so.  It seems to all, of course, be stuff that would be here.  So we are thinking at this point that it might be unlikely that we will load a trailer with any of this stuff right now.  We don't want to haul it all to Dallas and then haul it all right back, though that would seem to fit right in with our new norm.  So, kids, all the furniture that I had texted you pictures of - just put all that on hold for awhile.  If he ends up with a job in Dallas, or if he still has no job by the end of May when we have to move out of this apartment, then we will bring all of that to y'all.
We will decide late Thurs if we are going to drive to Dallas on Fri, or if we are going to wait till Wed to drive there.  I think the only reason we'd wait till Wed is if anything comes up here such as other interviews.  He meets with that oil man on Thurs (not an interview, just another conversation like they have been having for a year), and I have a haircut on Thurs, which I have already canceled once and rescheduled, which was already late because of the timing of my being here, and which I am in desperate need of, as I am looking like a sheep dog, so I am surely hoping that we will be heading to Dallas by then.
Only God knows if any of this SA stuff will transpire.  But if it does, I will be unpacking some of the things that I just packed.  Just the necessities to get us by till we can then move out of this apartment and away from the yelling, deaf cattle upstairs that sleep by day and run by night, the screaming cacklers next door that sit outside on little pillows on the concrete and drink beer till 2am, the bbq-ing partiers downstairs that start their cooking and drinking at 11pm, and the train that parks at the gravel pit in our backyard and blows its horn all. night. long.
I'll let y'all know how the interview tomorrow goes, assuming it goes.
Posted by Shannon @ Silver Trappings at 7:50 PM No comments:

A Library Card Catalogue for My Studio

I have been looking for a library card catalogue for my studio for a couple of years now.  I found one in a little antique store in Waxahachie.  I looove it - it just made this corner of my studio.  This is the view as you enter my space.  I'm in the process of labeling all the drawers...I usually open about 12 drawers before I find the one I'm looking for. 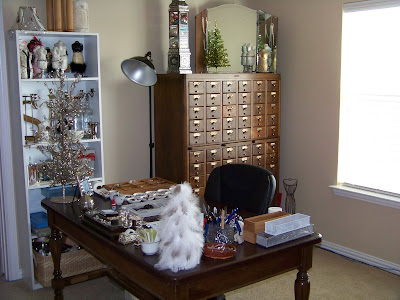 This is the storage I have in this space.  My studio in KS had a full closet - I only have open storage in this house, so I will have to work at keeping my storage neat and tidy! This wall is the "ugly" wall.  The necessary printers.  One of those white, plastic folding tables from Sam's.  A TV so I can watch Sabrina and Christmas movies all year round.  But I'm glad to have room for two tables in my new studio!  Now I can leave beads all over one table and scrapbooking and journaling stuff all over the other table. 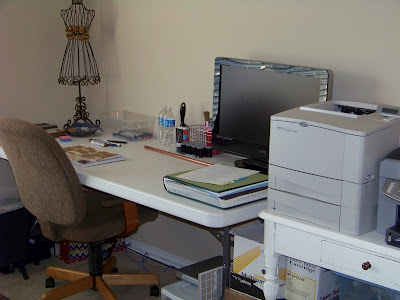 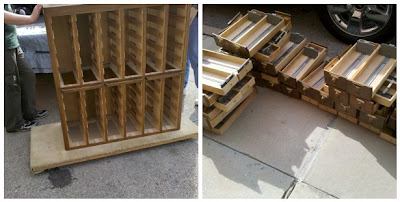 I have to admit, the day after I bought this I had buyer's remorse - not because I didn't like it, but because my hubby did our taxes...because we sold our house a year ago and have been apartment hopping and are now in a rent house and have no mortgage deductions...we owe almost $10,000 in taxes.  Yes, you read that right.  I'm still in shock.  But....once I got this home... yes, I'm still glad I bought it!

Posted by Shannon @ Silver Trappings at 6:18 PM No comments:

These are a few of the beads I bought today at a bead show in Dallas.  Technically, these are supposed to be part of my Christmas present from my hubby.  Which would mean that I should not be using any of them until after Christmas....﻿ 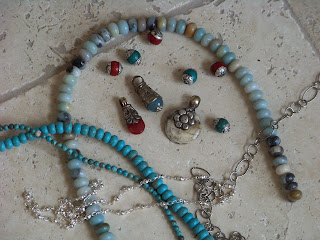 Posted by Shannon @ Silver Trappings at 4:18 PM No comments:

Comfort in the Chaos

This makes me happy
﻿ 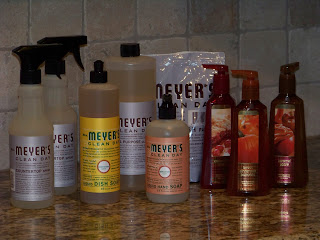 because a lot of my house still looks like this 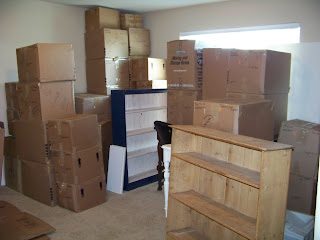 ...and what is even better -- I now live where I can stop on my way HOME to pick up Mrs. Meyers and Bath and Body works.  It is not a 45 minute drive to civilization anymore!  Oh, I still want my Pinterest Farmhouse; it's just that I have discovered something about myself - my farmhouse needs to be just barely outside of the city....

Shannon
Posted by Shannon @ Silver Trappings at 9:43 AM 1 comment:

Well, we come to the next stop in this transition from being a military family to settling in to a permanent home.  No, not the final stop.  Just the next stop. 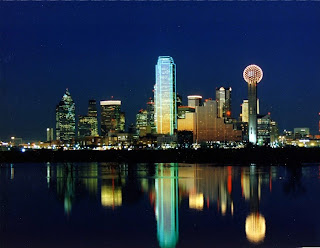 So far since my hubby retired, he lived in an apartment for several months in DC working a contract job.  We sold our house in KS and four of us moved into a tiny 2-bedroom apartment, where hubby then joined us.  Then we all five moved into another tiny 2-bedroom apartment in TX - this was a happy step in the process - it got us back to TX.  Now we have finally narrowed down a vast area of possibilities to the fact that we want to build north of the Dallas area.

It would be nice to leave all our stuff in permanent storage till we build, but, alas, the military won't house our household goods for that long.  So we have now rented a house...a real house...in the north Dallas area.  This will be a year-long stop (or so) while we look for a piece of land and build our final stop.  So only one more week to go in this apartment-hopping we have been doing.  My son will possibly be the happiest.  He has been sleeping in the dining room... I think he just might be looking forward to having a room of his own again...  And we will all be happy to get our stuff back.  Although, I will say this -- it's amazing what you realize you don't need when you only have the absolute BARE necessities for 7 months.

To keep myself occupied, I have spent much time on Pinterest.  Who hasn't??  Many pictures in my Pinterest of the farmhouse I want to build.  If you're on Pinterest, let me know so I can find you if I haven't already.

Gotta go throw a few things into a box now...

4th of July Ideas and Recipes 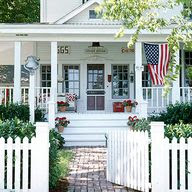 First of all, I wish I lived in the house above! How fun would it be to live there? And to host a 4th of July party there?? With streamers and lights in the back yard! 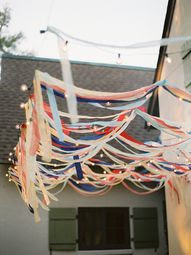 Right now we are in a little apartment, looking for a place to build a house...all of our stuff in storage...so my 4th of July party is not going to look like the above! But here are a few fun, easy ideas that I can manage...
How cute are these flowers and flags in a can!?

I'm not gonna paint my fingernails like this...I wish I could...but I would promptly ruin it. Maybe I can get my daughter to do this with all the little girls that will be here, though!

Here is a cute presentation...your silverware, napkin and glass all together. 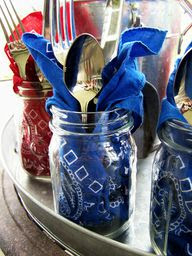 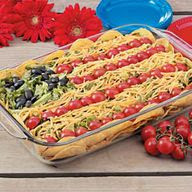 I don't eat hotdogs, but I'm going to make some sub sandwiches for one of our meals and tie them up with string and scrapbook paper! What a cute idea!

And this sparkling punch in one of those great glass beverage dispensers! Going to Garden Ridge for a couple of different dispensers next week. 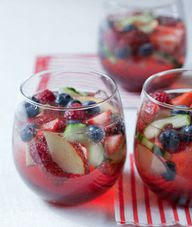 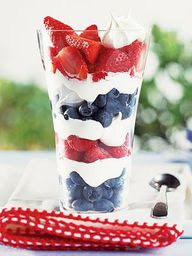 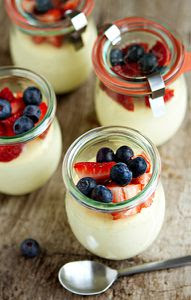 If you go to my Pinterest here: http://pinterest.com/silvertrappings/4th-of-july/, you can see some more ideas for the 4th of July. And each picture links to its source, so you can get the how-to and the recipes! Have fun planning your 4th!
Shannon
Posted by Shannon @ Silver Trappings at 10:00 AM 1 comment:

For the decoration of you and your home!

All graphics, photo images and text are the property of Shannon Jones and Silver Trappings. Please do not copy or use without written permission.

Shannon @ Silver Trappings
I have been so inspired by the beautiful blogs I have visited. It is my hope that this will be a blog that will give inspiration to others.

Looking for Something Special?